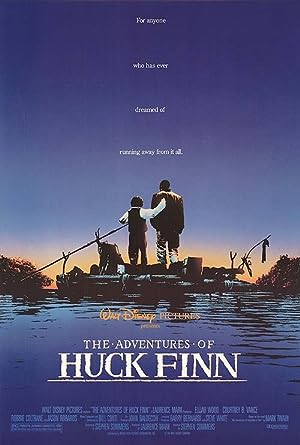 The cast of The Adventures of Huck Finn

What is The Adventures of Huck Finn about?

Huckleberry Finn is a young boy in the 1840s, who runs away from home, and floats down the Mississippi River. He meets a run away slave named Jim and the two undertake a series of adventures based on the Picaresque novel by Mark Twain. As the story progresses the duo exploit an array of episodic enterprises, while Huckleberry slowly changes his views of bigotry. Along the way, Huck and Jim meet the King and Duke, who ultimately send the protagonists towards a different route on their journey. As Huck begins to have a change of heart, he gradually begins to distinguish between right and wrong, and conclusively, Huck is faced with the moral dilemma between the world's prejudice, of which he's grown up with, and the lessons Jim has taught him throughout the story about the evils of racism.

Where to watch The Adventures of Huck Finn

The Adventures of Huck Finn Trailer

More Adventure movies like The Adventures of Huck Finn

More Adventure tv shows like The Adventures of Huck Finn