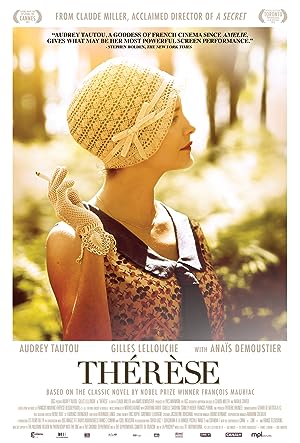 How to Watch Thérèse 2012 Online in Australia

What is Thérèse about?

The year is 1926. In the Landes region, free-spirited Thérèse Larroque, the daughter of a wealthy pinery owner and radical-socialist politician, marries Bernard Desqueyroux, another pinery owner. Although she does it half-heartedly, she thinks that marriage may help her to "sort out all the ideas in her mind". But her disappointment is great. Her wedding night is all but fascinating and when she becomes pregnant she realizes the baby matters more to Bernard than herself. While Thérèse stifles in her husband's beautiful residence among stiff in-laws who do not think high of her, ideas keep on roaming her mind.

Where to watch Thérèse

Which streaming providers can you watch Thérèse on

Here is the comprehensive list of streaming providers that will show Thérèse in Australia. If Thérèse will appear with other providers further down the line, this table will be updated.

The cast of Thérèse

Thérèse is a great Drama movie, we’ve selected several other movie options that we think you would like to stream if you have watched Thérèse

Thérèse is a great drama show, we’ve selected several other show options that we think you would like to stream if you have watched Thérèse