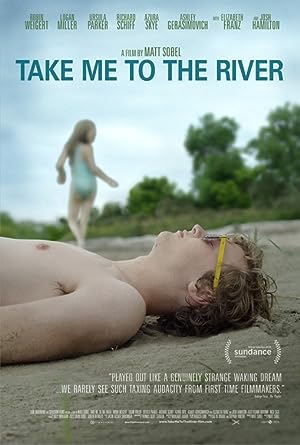 The cast of Take Me to the River

What is Take Me to the River about?

Ronnie Scheib of Variety says this is writer-director Matt Sobel's, first full length film. 'Take Me to the River' unfolds in an atmosphere of mystery and dread that contrasts with its surroundings' bucolic serenity. A gay Californian teenager's visit to Nebraskan relatives turns more nightmarish than he anticipated, for reasons that he never could have imagined, as clouds of displaced sexuality hover over flowing rivers, fertile fields and little girls on big horses. Told uniquely through the kid's (Ryder, played by Logan Miller) largely uncomprehending point of view, this Midwestern gothic tale maintains sufficient visual distance to suggest alternative narratives from other perspectives. This superlatively acted indie film promises more than it delivers, but chillingly evokes sufficient primal dread to intrigue all audiences. The film debuted at the Sundance festival on January 26, 2015.

Where to watch Take Me to the River

More Drama movies like Take Me to the River

More Drama tv shows like Take Me to the River