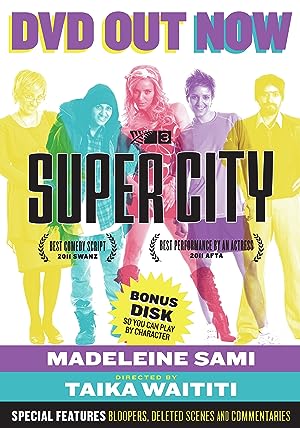 How to Watch Super City Online in Australia

What is Super City about?

Sami hilariously transforms into acutely observed and very different characters all living in our country's super city. In season two, Ofa is a welfare case-manager demanding everyone follow in her footsteps out of poverty. Levi is a new half-back in his South Auckland rugby team and desperate to be one of the 'boys'. Ray is a mechanic juggling his small business with his wife's bodybuilding training. Mary is an ambitious rocker desperate to escape from Howick but denigrated to singing pub gigs. In season one, there's Pasha, an aging cheerleader clinging to her partying lifestyle; Azeem, an immigrant taxi driver embracing Maori culture; Jo, a closeted gym instructor in love with her best friend; Linda, the runt of her "old girls" clique fostering impoverished artists and Georgie, a homeless girl whose freedom is unexpectedly interrupted.

Where to watch Super City

Which streaming providers can you watch Super City on

Here is the comprehensive list of streaming providers that will show Super City in Australia. If Super City will appear with other providers further down the line, this table will be updated.

The cast of Super City

Super City is a great Comedy movie, we’ve selected several other movie options that we think you would like to stream if you have watched Super City

Super City is a great comedy show, we’ve selected several other show options that we think you would like to stream if you have watched Super City