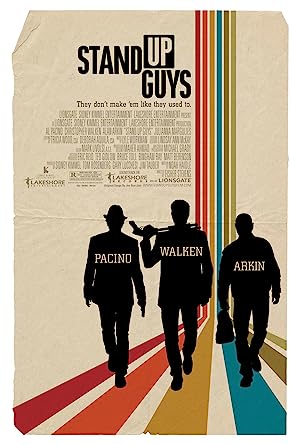 How to Watch Stand Up Guys 2012 Online in Australia

The cast of Stand Up Guys

What is Stand Up Guys about?

After 28 years, Val gets out of prison, and his friend Doc picks him up. The local mob boss, Claphands, wants Val dead (Claphands' son died in a robbery and he blames Val) and Doc has until morning to kill him. It's a long night: Val wants to party - they visit a cat house, Val needs Viagra, they break into a pharmacy. After midnight, they pick up Hirsch, their old wheelman, drive the city in a stolen car. They visit the cat house, help a woman in distress, bury a body, and eat at Doc's hangout, a café where the waitress, Alex, is cheerful. The sun rises, Claphands wants Val dead, and Val, who has figured out his fate, is resigned. Is there anything left to take care of?

Where to watch Stand Up Guys