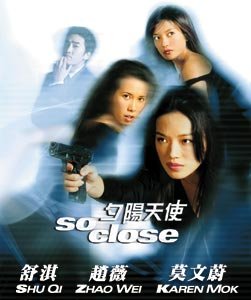 How to Watch So Close 2002 Online in Australia

The cast of So Close

What is So Close about?

The brothers Chow Nunn and Chow Lui's giant computer company is facing a tense crisis - a powerful computer virus is rapidly wiping out their computer network. At the last minute a cyber-friend arrives to join the battle. The mysterious 'Angel.com' battles the virus and saves the company. Invited by Chow Lui for a visit in person, Angel.com arrives in the form of the beautiful Lynn. But it turns out Lynn is a professional assassin with amazing high-tech and kung fu skills. She kills Chow Lui with cyanide hidden in a pair of sunglasses. She's aided by her sister Sue, who operates the pair's World Panorama surveillance system, which allows them to tap into any video security system in the world. Young cop Kong Yat Hong and her partner Mark are put on the case. Hong has a brilliant mind and immediately senses she's dealing with a killer with very special skills. Realizing they are facing a tough adversary, Lynn and Sue become fascinated with Hong as well. Lynn runs into Yan, the cousin of an old friend who died. Lynn and Yan shared an unspoken love in the past which is now rekindled in the open, and Lynn begins to question whether she wants to continue to be an assassin. Chow Nunn was behind his older brother's death. He hired Angel.com to kill Lui because Lui opposed Nunn's business plans, and also because Nunn is carrying on a secret affair with Lui's wife. But when Hong's investigation starts to point to Nunn, Nunn becomes worried and decides to hire Angel.com for another hit ^Ö only so he can double-cross them, wipe them out and prevent them from leading the police back to him. Yan tells Lynn he loves her and wants to marry her. After battling an attack by robbers with her amazing martial arts skills, she tells Yan her family's history. Her father invented the World Panorama for use by the authorities, but was turned down. Suspiciously, word of the device got out to the underworld and both parents were brutally killed in front of the girls' eyes by criminals eager to get their hands on the invention. Bereft at the loss of their parents and disillusioned with the law, the sisters turned professional assassins, killing criminals for other criminals. Lynn tells Sue she wants to stop their criminal life and get married ^Ö she won't accept Chow Nunn's order for the second killing. But Sue, angry and feeling abandoned by Lynn, decides to carry out the killing herself. Lynn realizes what's happening and rushes to save Sue, who doesn't have the skills to carry out the hit. They are attacked by Chow's men but escape. Now the assassin and the cop must join forces - so Sue can avenge her sister's death and Hong can prove her innocence in a spectacular confrontation at Chow Nunn's headquarters...

Where to watch So Close