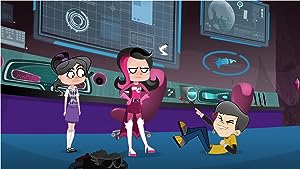 How to Watch SheZow Online in Australia

What is SheZow about?

When Guy Hamdon and his family inherit Aunt Agnes' home, he and his twin sister, Kelly, discover that she was the famed superheroine, SheZow. Doubting that, Guy puts on SheZow's ring as a lark, only to find to his shock that he is transformed into the superheroine himself. Now, Guy is forced to carry on his Aunt's legacy and fight the forces of evil in Megadale, using his newly acquired powers, gadgets, and a pink super suit. With Kelly and his best friend Maz's helping in this crusade, Guy discovers that his identity's feminine theme is a small price to pay for the excitement to come.

Where to watch SheZow

Which streaming providers can you watch SheZow on

Here is the comprehensive list of streaming providers that will show SheZow in Australia. If SheZow will appear with other providers further down the line, this table will be updated.

The cast of SheZow

SheZow is a great Action movie, we’ve selected several other movie options that we think you would like to stream if you have watched SheZow

SheZow is a great action show, we’ve selected several other show options that we think you would like to stream if you have watched SheZow