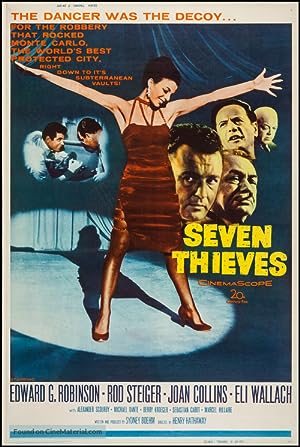 How to Watch Seven Thieves 1960 Online in Australia

Where to watch Seven Thieves

What is Seven Thieves about?

In Monte Carlo, Theo Wilkins (Edward G. Robinson) recruits his young protégé Paul Mason (Rod Steiger), just released from prison, to help him rob the famous casino of four million dollars. The plan is straightforward. On the night of the Governor's Ball, Theo will create a distraction in the casino by having one of the team collapse requiring urgent medical attention. During that time, Paul and another member of the crew will get the money from the vault. When the ambulance arrives, the money will leave with the sick man. The plan is a good one, but not everyone will survive the robbery, and no one will get rich from it.

Which streaming providers can you watch Seven Thieves on

Here is the comprehensive list of streaming providers that will show Seven Thieves in Australia. If Seven Thieves will appear with other providers further down the line, this table will be updated.

The cast of Seven Thieves