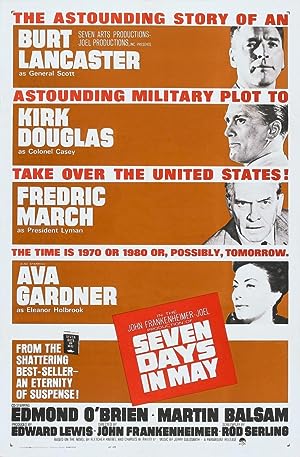 How to Watch Seven Days in May 1964 Online in Australia

What is Seven Days in May about?

An unpopular U.S. President manages to get a nuclear disarmament treaty through the Senate, but finds that the nation is turning against him. Jiggs Casey, a Marine Colonel, finds evidence that General Scott, the wildly popular head of the Joint Chiefs and certain Presidential Candidate in 2 years is not planning to wait. Casey goes to the president with the information and a web of intrigue begins with each side unsure of who can be trusted.

Where to watch Seven Days in May

Which streaming providers can you watch Seven Days in May on

The cast of Seven Days in May

Seven Days in May Trailer

More drama tv shows like Seven Days in May

Watch Seven Days in May