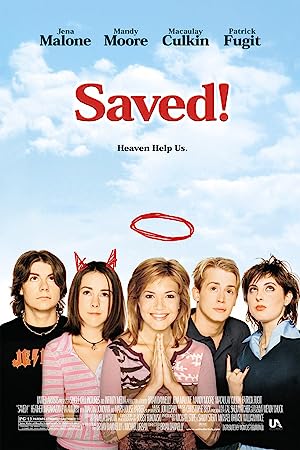 How to Watch Saved! 2004 Online in Australia

The cast of Saved!

What is Saved! about?

Mary is a senior at American Eagle Christian High School in suburban Baltimore. She considers herself born again, despite the fact that her rebirth was at age three. Her best girlfriends are two classmates that comprise the Christian Jewels band with her. Hilary Faye is the alpha Christian, who outwardly is perfect, especially in her connection to God. And Veronica is ethnic Vietnamese who was adopted and thus saved by a black Christian couple. A third is Tia, who is generally an outsider in her geek status but who aspires to be in this Christian clique. Also within their social circle solely out of necessity is Hilary Faye's older brother Roland, who has been in a wheelchair since age nine after falling out of a tree, and who, out of family obligation Hilary Faye transports everywhere including to/from school. Beyond that transportation, Roland and Hilary Faye generally have disdain for each other. One of Hilary Faye's God driven missions for the year is to save Cassandra, a Jewish girl new to the school, she who was expelled from her last school and is only attending a faith based school as a marginally better option than the alternative. Mary's world starts to fall apart just before the start of the school year when her boyfriend, Dean, admits to her that he thinks he is gay. Mary receives what she believes are messages from God, including one indirectly through Hilary Faye, leading to her thinking she can save Dean by having sex with him, God who will restore her spiritual virginity because of this act. The outcome is that Dean is sent away for conversion therapy and outed anyway, and Mary becomes pregnant, something she doesn't tell Dean or any of those closest to her, including her mother, Lillian. Her pregnancy affects how she treats another new student, Patrick - the son of Pastor Skip, the school's principal - the two who are attracted to each other. Beyond Mary trying to figure out what to do, Mary's Christian faith is tested by events around her because of Dean and/or her pregnancy, as well as by many Christians justifying what may be considered sins in having a higher Godly purpose, which she is unaware includes a relationship between her mother and married Pastor Skip.

Where to watch Saved!