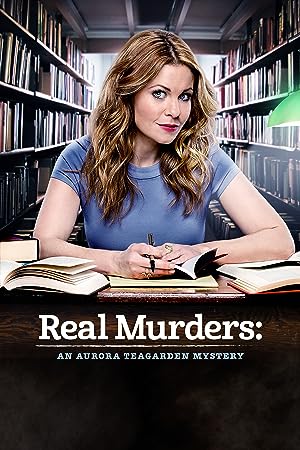 How to Watch Real Murders: An Aurora Teagarden Mystery 2015 Online in Australia

The cast of Real Murders: An Aurora Teagarden Mystery

What is Real Murders: An Aurora Teagarden Mystery about?

The latest meeting of Lawrenceton librarian Aurora "Ro" Teagarden's real murders discussion club - where fellow member and Ro's best friend, newspaper reporter Sally Allison, had arranged for new Lawrenceton resident, Ro's favorite current mystery novelist and temporary university professor, Robin Daniels, to speak - is canceled after one of the club members is found bludgeoned to death in his/her home. The case is being led by Homicide Detective Lynn Liggett-Smith, the husband of fellow detective, and Ro's ex-boyfriend and ex-club member, Arthur Smith. There is no love lost between Lynn and Ro because of Ro's amateur sleuthing in past murder cases in town. Because of a telephone call to the meeting venue earlier in the evening referring to the Julia Wallace murder, the initial thought by Ro based on this circumstantial evidence is that the murderer is one of the club members. Julia Wallace's unsolved murder from 1934, the case which only the club members would have known was going to be discussed at the meeting, mimics this murder. Robin's coincidental arrival onto the scene and his seeming inability or non-want to provide an alibi for the time of the murder also places him on the suspect list. As the detectives, Ro and the club members investigate, other club members and their loved ones are targeted by the murderer, each attempt mimicking a case previously discussed by the club. Ro systematically tries to discover who the next victim or victims will be both to prevent the attempts from succeeding and discover the identity of the murderer. She also has to decide whether to trust Robin, the two who are beginning to have feelings for each other.

Where to watch Real Murders: An Aurora Teagarden Mystery