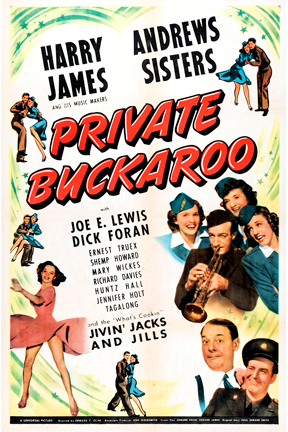 How to Watch Private Buckaroo 1942 Online in Australia

What is Private Buckaroo about?

A Universal Army enlistment promotion, produced as a musical showcase for Harry James, the Andrews Sisters, Joe E. Lewis, and Donald O'Connor & Peggy Ryan. The film's thin plot has James drafted, and joining him is the band's lead vocalist Lon Prentice (Dick Foran), who doesn't believe that Army training and regulations are necessary for anyone of his skill and fame. Shemp Howard steals the film whenever James and the Andrewses aren't performing. As Sgt. Snavely, he's effectively teamed with Mary Wickes as his shrewish fiancée, trying desperately to keep her away from the attentions of nightclub comic and USO performer Lancelot Pringle McBiff (Joe E. Lewis). Shemp also has the opportunity to clown onstage with the Andrews Sisters during a musical finale, as they perform Don't Sit Under the Apple Tree. Arguably, Shemp's best solo feature film credit.

Where to watch Private Buckaroo

Which streaming providers can you watch Private Buckaroo on

The cast of Private Buckaroo

Private Buckaroo is a great Comedy movie, we’ve selected several other movie options that we think you would like to stream if you have watched Private Buckaroo

Private Buckaroo is a great comedy show, we’ve selected several other show options that we think you would like to stream if you have watched Private Buckaroo