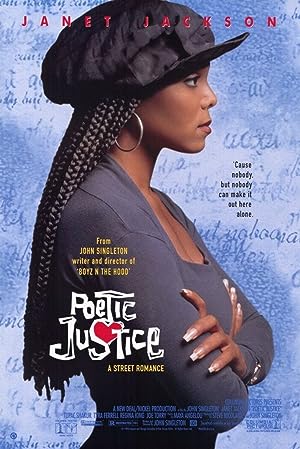 How to Watch Poetic Justice 1993 Online in Australia

What is Poetic Justice about?

After witnessing the murder of her first and only boyfriend, young Justice decides to forget about college and become a South Central Los Angeles hairdresser. Avoiding friends, the only way for her to cope with her depression is by composing beautiful poetry. On her way to a convention in Oakland, she is forced to ride with an independent-minded postal worker whom she has not gotten along with in the past. After various arguments between them and their friends, they start to discover that their thoughts on violence, socially and domestically, are the same. Justice may finally feel that she is not as alone as before.

Where to watch Poetic Justice

Which streaming providers can you watch Poetic Justice on

Here is the comprehensive list of streaming providers that will show Poetic Justice in Australia. If Poetic Justice will appear with other providers further down the line, this table will be updated.

The cast of Poetic Justice

Poetic Justice is a great Drama movie, we’ve selected several other movie options that we think you would like to stream if you have watched Poetic Justice

Poetic Justice is a great drama show, we’ve selected several other show options that we think you would like to stream if you have watched Poetic Justice