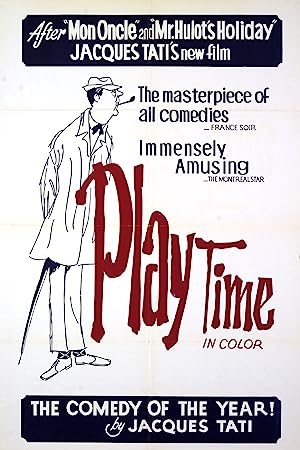 How to Watch Playtime 1967 Online in Australia

What is Playtime about?

Monsieur Hulot has to contact an American official in Paris, but he gets lost in the maze of modern architecture which is filled with the latest technical gadgets. Caught in the tourist invasion, Hulot roams around Paris with a group of American tourists, causing chaos in his usual manner.

Where to watch Playtime

Which streaming providers can you watch Playtime on

Here is the comprehensive list of streaming providers that will show Playtime in Australia. If Playtime will appear with other providers further down the line, this table will be updated.

The cast of Playtime

Playtime is a great Comedy movie, we’ve selected several other movie options that we think you would like to stream if you have watched Playtime

Playtime is a great comedy show, we’ve selected several other show options that we think you would like to stream if you have watched Playtime