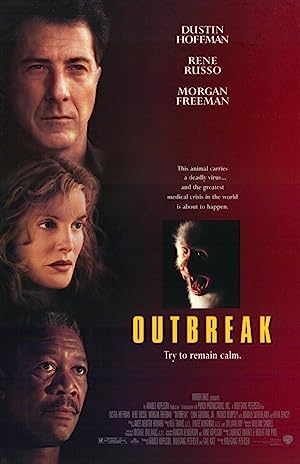 How to Watch Outbreak 1995 Online in Australia

The cast of Outbreak

What is Outbreak about?

In July of 1967, In Motaba River Valley, Zaire, a virus with a 100% mortality rate starts infecting people. The virus becomes known as the Motaba virus, and it's so deadly that it causes severe bleeding and liquefies internal organs, killing within 3 days. The virus wipes out Motaba River Valley, and a devastatingly huge fire bomb is dropped onto Motaba River Valley in order to reduce the chances of further infection. The bomb was dropped on the orders of corrupt General Donald McClintock, even though an army surgeon, General Bill Ford, was against the idea. 27 years later, in 1994, there is another outbreak in Motaba River Valley. At the United States Army Medical Research Institute of Infectious Diseases (USAMRIID), located at Fort Detrick in Maryland, Colonel Sam Daniels is doing research on the Motaba virus, and so is his ex-wife Roberta Keough, who works at the Center for Disease Control and Prevention (CDC) in Atlanta, Georgia. A monkey carrying the Motaba virus stows away on a ship that is heading for the USA, and after the monkey's arrival, people in Cedar Creek, California start becoming infected by the virus. Sam and Roberta head into Cedar Creek with fellow doctor Casey Schuler, and they start searching for the monkey, thinking that the monkey is the key to finding a cure. Along the way, Sam stumbles onto some information that may be of help -- McClintock has been concealing vital information from the president of the United States. Since 1967, McClintock and Ford have been in possession of E-1101, a serum that was made to cure the virus. McClintock has been trying to stop Ford from coming forward with this information, and so far, McClintock has succeeded. McClintock now wants to drop onto Cedar Creek the kind of firebomb that was dropped on Motaba River Valley 27 years ago. Sam and Roberta figure out that the virus in the Cedar Creek outbreak is a new strain of the Motaba virus -- an airborne strain that is even more contagious than the flu. When a new serum is made to stop the new strain, Sam and Roberta set out to stop McClintock from having the town blown up.

Where to watch Outbreak