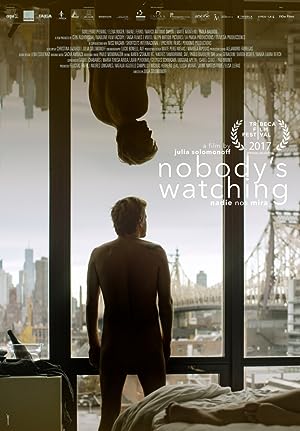 How to Watch Nobody's Watching 2017 Online in Australia

The cast of Nobody's Watching

What is Nobody's Watching about?

NADIE NOS MIRA is a film about the struggle of self-imposed exile; how the pleasures of anonymity and freedom contrast with the pain of loneliness and loss that shapes immigrant experience. NICO, mid 30's, is a young Argentine actor fighting to build a career in the US, without assistance, or connections, never too far from heart-breaking failure, but often blinded by the mirage of immediate success. Nico has left a promising acting career in Argentina, after a tumultuous break-up with his mentor/producer. He lands in New York, lured into believing that his talent will help him find success "on his own" and prove his self-worth. But that's not what he finds. Too blond to play latino, his accent to strong to play anything else, Nico gets stuck between identities: that of the successful South American actor, and temporary immigrant needing to juggle odd jobs and under-the-table employment, in search of the ever-elusive acting part that will provide an adjustment of status. When Andrea, his beautiful Argentinean ex-roommate and confidante, asks him to take care of her baby Theo; Nico becomes his male nanny ("manny") and doesn't suspect how deeply this new bond will affect him. NOBODY'S WATCHING examines an immigrant experience that doesn't often land on the screen; the bittersweet struggle of choosing to make a new land your own, and the realization that actual success lies in the journey of self- discovery and the unexpected gains that "failure" can provide.

Where to watch Nobody's Watching