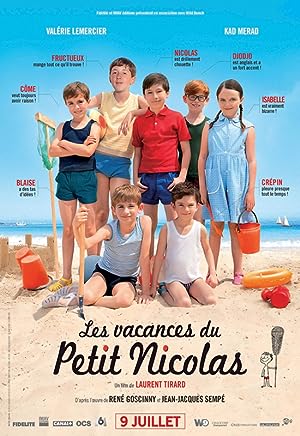 How to Watch Nicholas on Holiday 2014 Online in Australia

The cast of Nicholas on Holiday

What is Nicholas on Holiday about?

It's the end of the school year. The long-awaited moment of summer vacation has arrived. Little Nicolas, his parents, and Grandma head to Hotel Beau-Rivage by the seaside. On the beach, Nicolas quickly makes a new set of friends: there's Blaise, who isn't on vacation because he lives in the area, Fructueux, who likes everything, even fish, Djodjo, who doesn't speak like them because he's English, Crépin, who cries all the time, and Côme, who always wants to be right and who is very annoying. But Nicolas also gets to know Isabelle, a little girl who always looks at him with big, round and worried eyes, and who Nicolas believes his parents want to force him to marry. Misunderstandings accumulate, blunders begin. One thing's for sure: for everyone, this will be an unforgettable vacation.

Where to watch Nicholas on Holiday