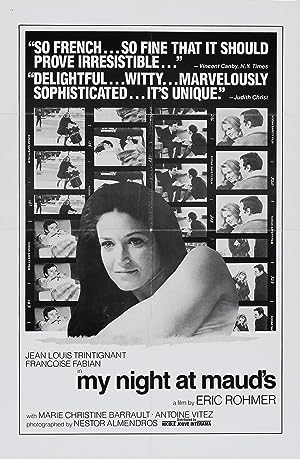 How to Watch My Night at Maud's 1969 Online in Australia

What is My Night at Maud's about?

The narrator (Jean-Louis), a devout Catholic, moves to a provincial town and vows to marry Francoise, a pretty blond he notices at mass. Vidal, an old school friend, invites him to visit the recently divorced Maud, and the narrator ends up staying the night, having philosophical discussions in her bedroom. Next morning the narrator engineers a meeting with Francoise.

Where to watch My Night at Maud's

Which streaming providers can you watch My Night at Maud's on

The cast of My Night at Maud's

My Night at Maud's Trailer

More comedy tv shows like My Night at Maud's

Watch My Night at Maud's