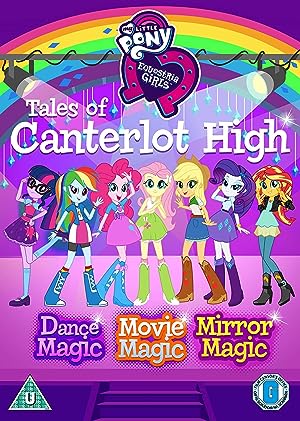 How to Watch My Little Pony: Equestria Girls Specials Online in Australia

What is My Little Pony: Equestria Girls Specials about?

1.Dance Magic - Sunset Shimmer, Applejack, Rainbow Dash, Fluttershy, Rarity, Twilight, and Pinkie Pie try to earn enough money to restore Camp Everfree to its original state. An upcoming dance competition offers to supply the winning group with tons of money. The girls compete in the contest to win the money, which would be more than enough for the restoration. 2. Movie Magic - Sunset Shimmer, Rainbow Dash, Fluttershy, Rarity, Twilight, Applejack, and Pinkie Pie are allowed to attend the filining of Daring-Do. During their visit, they discover that someone is sabotaging the filming and production of the Daring-Do movie, and attempt to find and stop the culprit. 3. Mirror Magic - Juniper, now working at a movie theater, discovers a mirror containing magic. Meanwhile, Sunset Shimmer, on a visit to Equesria, allows Starlight Glimmer to return with her to the human world.

Where to watch My Little Pony: Equestria Girls Specials

Which streaming providers can you watch My Little Pony: Equestria Girls Specials on

The cast of My Little Pony: Equestria Girls Specials