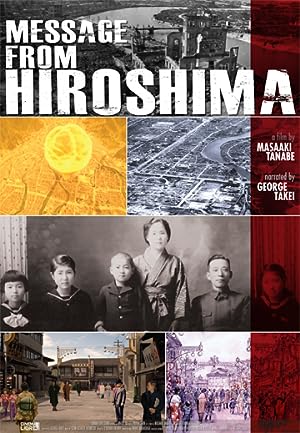 How to Watch Message from Hiroshima 2015 Online in Australia

The cast of Message from Hiroshima

What is Message from Hiroshima about?

Narrated by George Takei, Message From Hiroshima provides an inside look at life and culture in the city before the first atomic bomb was dropped. Today, where the Hon and Motoyasu Rivers meet, stands the Peace Memorial Park - the former location of the Nakajima district, which was once home to thousands of people and hundreds of businesses. When the first atomic bomb was detonated 2,000 feet above Hiroshima's city center on August 6, 1945, all of that vanished. Seventy years later, Director Masaaki Tanabe makes it his mission to revive the memory of what once was by interviewing hibakusha (survivors) and former residents. These heart-wrenching testimonials, along with computer -generated recreations of restaurants, shoe stores, cinemas, and the famous Industrial Promotion Hall, recreate the sights, sounds, and smells of a lost culture and people.

Where to watch Message from Hiroshima