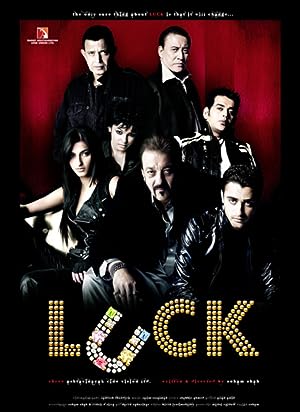 How to Watch Luck 2009 Online in Australia

The cast of Luck

What is Luck about?

Born lucky, Karim Moussa takes to exploiting it instead of focusing on studies. Now a wealthy gambler, he decides to recruit about a dozen lucky people to participate in a deadly game of survival. His agent, Lakhaan Tamaang, recruits Ram Mehra - whose father killed himself after losing 25 Crores - and is about to lose everything he and his mom own, and may end up being arrested for robbing an ATM machine; Major Jabbar Pratap Singh - who needs money for his wife's treatment; a camel jockey, Shortcut, sold by her parents for Rs.15000/-, who wants to make it big in life; a returning player, Ayesha, who had already participated, and is back for more; a psychotic serial killer, Raghav Raghuvaran, who miraculously escaped the death penalty. All of the above, including others from different countries, must compete, kill each other, with the survivor netting 20 Crores Rupees in just 20 days.

Where to watch Luck