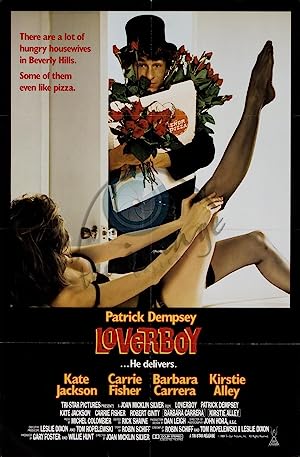 How to Watch Loverboy 1989 Online in Australia

The cast of Loverboy

What is Loverboy about?

College sophomore Randy Bodek is unfocused. The only thing he knows is that he loves his roommate, Jenny Gordon, who feels unappreciated as other things in his life seem to take precedence over her. He hasn't even told his parents, Diane and Joe Bodek, that he is living with a female, let alone a significant other. As such, Jenny breaks up with him at the end of the semester. While Randy is home during the summer break, Joe, against Diane's wishes, decides not to fund Randy's college education anymore as he is flunking all his classes, and hasn't yet declared a major. Not knowing what to do besides try to get back to college if only to be with Jenny, Randy gets a minimum wage job as a delivery guy at a pizza joint. During the course of his job, he meets Alex Barnett, a beautiful, older, sophisticated woman who likes pizzas with extra anchovies. To his surprise, she seduces him, after their sexual encounter which she gives him $200 to help him get back to college. Without telling him, she ends up telling her neglected, married female friends about Randy. As such, the pizza joint starts getting a lot of orders for pizzas with extra anchovies. Although Randy balks at the notion of being a stud for hire, he eventually goes along with it if only as a means to pay for his college tuition and be able to get back to Jenny. Through the process, he finds that most of the women just want companionship, romance and attention, which he ends up being able to provide, and which he didn't provide in a meaningful way to Jenny. There is the potential problem of anyone finding out what is happening, mainly his boss, angry jealous husbands, his parents and most specifically Jenny, who may have other guys waiting in the wings. Meanwhile, his parents, on the eve of their twentieth wedding anniversary, are facing their own marital problems focused primarily on Randy, problems which Diane may feel can be solved by a $200 pizza with extra anchovies.

Where to watch Loverboy