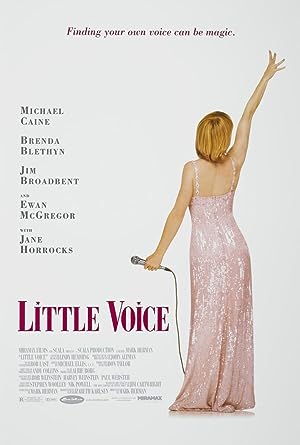 How to Watch Little Voice 1998 Online in Australia

What is Little Voice about?

The pathetically shy LV lives the life of a recluse listening to her late father's old records in her room and in the process driving her abusive, loud-mouthed mother, Mari Hoff, to distraction. At night, however, when her father's ghost visits, LV sings the songs of the great divas such as Judy Garland, Marilyn Monroe and Shirley Bassey. One evening LV is overheard by one of her mother's loathsome boyfriends, the disastrous dead-end talent scout Ray Say, who recognizes her innate talent and realizes this is his last big chance for the glittering prizes. Gambling everything Ray Say forces LV to appear at a local run-down, seedy night club run by Mr. Boo. As preparations for the big event proceed apace LV meets the equally shy Billy, a pigeon-racing telephone engineer and they form a tentative, gentle friendship. The big night finally arrives and everything is in readiness, the band, the club and even a big agent from London, but what about LV?

Where to watch Little Voice

Which streaming providers can you watch Little Voice on

Here is the comprehensive list of streaming providers that will show Little Voice in Australia. If Little Voice will appear with other providers further down the line, this table will be updated.

The cast of Little Voice

Little Voice is a great Comedy movie, we’ve selected several other movie options that we think you would like to stream if you have watched Little Voice

Little Voice is a great comedy show, we’ve selected several other show options that we think you would like to stream if you have watched Little Voice