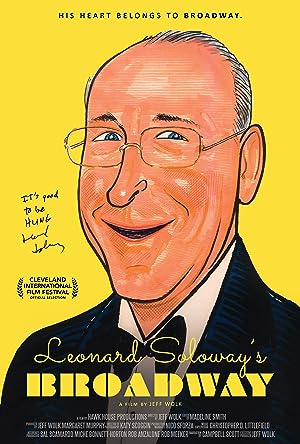 How to Watch Leonard Soloway's Broadway 2019 Online in Australia

Where to watch Leonard Soloway's Broadway What is Leonard Soloway's Broadway about?

Through verité documentary footage, humorous storytelling, interviews and archival film material, Leonard Soloway's Broadway captures a Broadway few ever see as told through the eyes of a legendary Broadway producer you've probably never heard of. He lived an unconventional life on his own terms who, over a 70-year span, staged over 100 shows (and counting) which generated history making headlines, over 40 Tony Awards, 62 Tony Nominations, 21 Drama Desk Awards, 29 Drama Desk nominations and 3 Pulitzer Prizes in addition to launching the careers of famous stars known the world over.

Which streaming providers can you watch Leonard Soloway's Broadway on

The cast of Leonard Soloway's Broadway