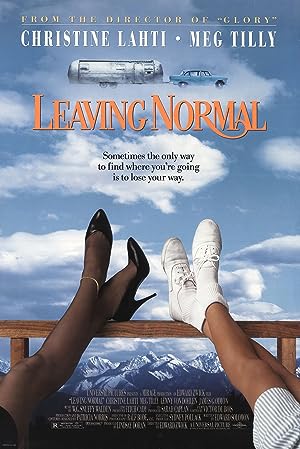 How to Watch Leaving Normal 1992 Online in Australia

The cast of Leaving Normal

What is Leaving Normal about?

For her entire life, twenty-seven year old Marianne Johnson has been on the move, the decisions which she's made as an adult which have been total failures, such as her second most recent marriage to Curtis Johnson, which brought her to Normal, Wyoming. However, she has an optimistic view of life, always believing that each decision she makes will be the right one. She is a linear thinker and despite being bright in this regard, she has no life or job skills, never having had a paying job besides a short stint in the army where she met Curtis. Conversely, thirty-eight year old Darly Peters wears her failures openly on her sleeve, she bulldozing her way through life. Currently a cocktail waitress in Normal, waitressing which dominates her resumé, Darly receives news that her ex-husband, who she left eighteen years ago, has died and has deeded the house which they were building at the time in remote Palmer Valley, Alaska to her. She believes this house will be the first time in her life she will feel settled. Seeing in Marianne a stranger in need, Darly offers Marianne a ride to Portland, where she will be staying with her judgmental sister and brother-in-law. As that move to Portland also proves to be another disaster in Marianne's life, she decides to accept Darly's invitation to go to Alaska with her. Along the way, they get into one adventure after another, meeting people who may affect their view of life. What will also affect their lives is Darly's Alaska past which leads to life in Alaska not quite what they were expecting.

Where to watch Leaving Normal