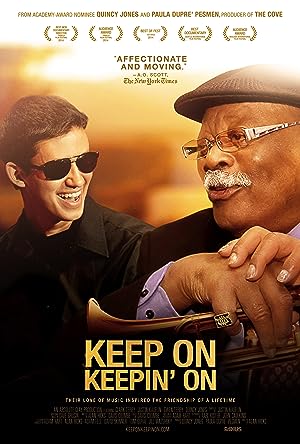 How to Watch Keep on Keepin' On 2014 Online in Australia

What is Keep on Keepin' On about?

First-time director/drummer from Australia, Alan Hicks, convinced his surfing mate and cinematographer, Adam Hart, to travel to the U.S. to follow and film 89-year-old jazz legend, Clark Terry (Quincy Jones's first teacher) over four years - to document an unlikely mentorship between Terry and a driven, blind piano prodigy, Justin Kauflin, 23. Clark, now 93, mentored Miles Davis as a young musician and is among the few performers ever to have played in both Count Basie's and Duke Ellington's bands. In Keep On Keepin' On, as Justin is invited to compete in an elite, international competition while battling terrible stage fright, Clark's health takes a critical turn for the worse. Over the course of filming, Clark loses his sight, which deepens his bond with Justin. As clocks tick, we are suddenly witness to two great friends tackling the toughest challenges of their interwoven lives. The film, from the producer of The Cove and Chasing Ice, captures the passing of the torch from a cultural icon to potentially his last student, inspiring viewers in climactic, cinematic fashion.

Where to watch Keep on Keepin' On

Which streaming providers can you watch Keep on Keepin' On on

The cast of Keep on Keepin' On

Keep on Keepin' On Trailer

More documentary tv shows like Keep on Keepin' On

Watch Keep on Keepin' On