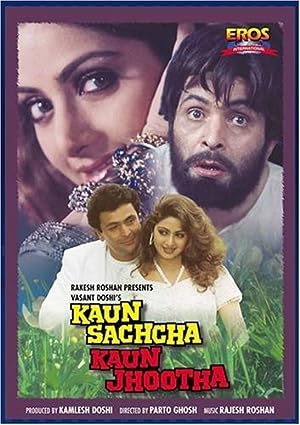 How to Watch Kaun Sachcha Kaun Jhootha 1997 Online in Australia

What is Kaun Sachcha Kaun Jhootha about?

In the darkness of night a dangerous, mentally disturbed man called Karan (Rishi Kapoor) escapes from the mental asylum and this news spreads in the city. When Karan sees Sapna (Sridevi) he becomes violent and furious and tries to kill her. Suryakant Verma, the I.G. of Police on receiving the phone call comes to Sapna's house and takes away Karan. The I.G. requests Sapna to treat Karan and bring him to normalcy since she is a psychiatrist. Sapna starts the treatment and takes Karan to the places where he has shared his pleasure with the other girl Madhu. Karan's condition improves and finally he becomes absolutely alright like a normal person. He appreciates and congratulates Sapna for her courageous steps and announces the engagement of Karan and Sapna. Sapna says she could not marry Karan because she is hiding some secret and wants to disclose it to Karan. Sapna confidently narrates the secret hoping that Karan will forgive her but when Karan comes to know the truth he handcuffs Sapna. Sapna is shocked to know that is Karan is a C.B.I. Officer. What are the secrets Sapna reveals to the court? Who is the real culprit or murderer? Whether Sapna is innocent? Who is the other girl Madhu?