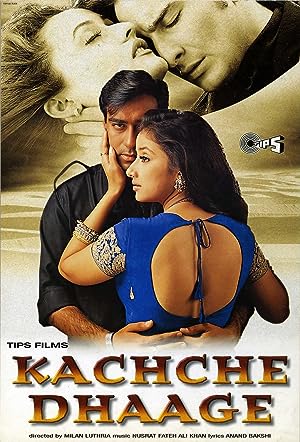 Unemployed Aftab is into smuggling on Indo-Pak border. One day he attempts to grab a consignment of arms and ammunition that is being supplied to terrorists. When he finds that he is being followed, he decides to destroy the consignment only to be recognized by the terrorists. Meanwhile, he goes to arrange his marriage with his beloved, Ruksana, whereby questions arise about his biological father; questions that he or his mother, Mariam are unable to answer, thus the marriage plans become nulled. A few days later he gets to meet Ramakant Pandit who Mariam introduces to him as his father and who on his death bed begs to forgive him. Shortly after, Ramakant passes away and Aftab gets to meet his step-brother Dhananjay alias Jai who is quite resentful towards Aftab and his mother. Meanwhile, Aftab and Mariam are apprehended and tortured by the same terrorists whose booty was destroyed by Aftab. He is forced to call Jai for help. Fortunately Jai agrees after Aftab pleads with him and soon both are on the run from not only the terrorists but the local police who accuses the duo of being hand in glove with the terrorists.

Here is the comprehensive list of streaming providers that will show Kachche Dhaage in Australia. If Kachche Dhaage will appear with other providers further down the line, this table will be updated.

Kachche Dhaage is a great Action movie, we’ve selected several other movie options that we think you would like to stream if you have watched Kachche Dhaage

Kachche Dhaage is a great action show, we’ve selected several other show options that we think you would like to stream if you have watched Kachche Dhaage