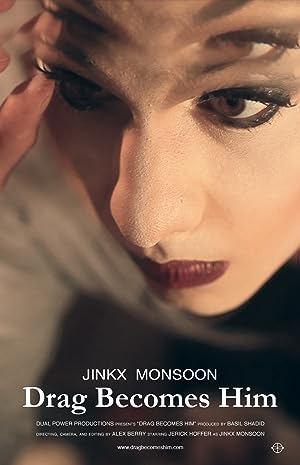 How to Watch Jinkx Monsoon: Drag Becomes Him 2015 Online in Australia

The cast of Jinkx Monsoon: Drag Becomes Him

What is Jinkx Monsoon: Drag Becomes Him about?

Drag Becomes Him provides an intimate glimpse inside the life of internationally acclaimed drag performer Jinkx Monsoon. This raw and affectionate film follows the passionate pursuits that transformed a working class boy in a struggling family to an illustrious performer on a global stage. Influenced by a grandmother with charm school polish, Jerick Hoffer learned to fuse the sophistication of a southern belle with the crass behavior of a working girl. Jinkx Monsoon has what RuPaul describes as "a stage left, off center kind of quality." Drag Becomes Him follows Jinkx's trajectory from a small stage in Portland, Oregon through a growing career in Seattle to the relinquishing of the crown one year after winning RuPaul's Drag Race. Expanded from the acclaimed five-part web series of the same name, this cherished portrayal of Jinkx Monsoon peels back the layers on one of the brightest stars on the drag circuit.

Where to watch Jinkx Monsoon: Drag Becomes Him