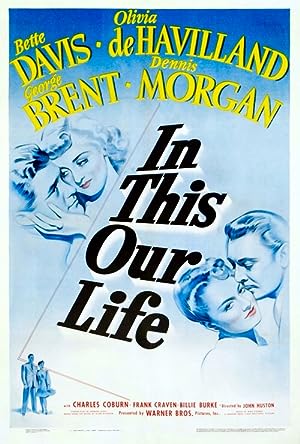 How to Watch In This Our Life 1942 Online in Australia

Where to watch In This Our Life

What is In This Our Life about?

A young woman, Stanley Timberlake, dumps her fiance, Craig Fleming, and runs off with her sister Roy's husband, Peter Kingsmill. They marry, settle in Baltimore, and Stanley ultimately drives Peter to drink and suicide. Stanley returns home to Richmond only to learn that her sister Roy and old flame Craig have fallen in love and plan to marry. The jealous and selfish Stanley attempts to win back Craig's affections, but her true character is revealed when, rather than take the rap herself, she attempts to pin a hit and run accident on the young black clerk, Parry Clay, who works in Craig's law office.

Which streaming providers can you watch In This Our Life on

The cast of In This Our Life