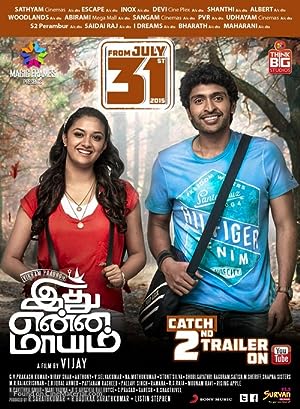 How to Watch Idhu Enna Maayam 2015 Online in Australia

What is Idhu Enna Maayam about?

Arun (Vikram Prabhu) runs a drama troupe with like-minded friends but sadly there is no big reception. In order to make some money, they start a firm called Unnal Mudiyum Thambi (UMT) through with they literally write script and execute it to help the romantically challenged youngsters. Everything goes well until a businessman called Santhosh (Navdeep) approaches UMT as he badly wants to marry Maya (Keerthi Suresh).

Where to watch Idhu Enna Maayam

Which streaming providers can you watch Idhu Enna Maayam on

The cast of Idhu Enna Maayam

Idhu Enna Maayam is a great Comedy movie, we’ve selected several other movie options that we think you would like to stream if you have watched Idhu Enna Maayam