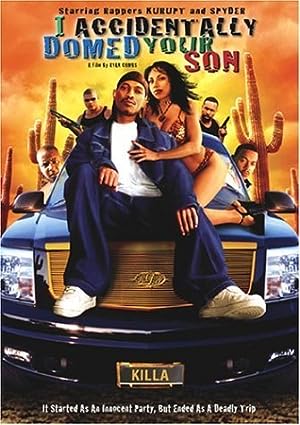 What is I Accidentally Domed Your Son about?

This offbeat dark comedy take place when four friends (Brisco, J Rob, Pedro, and Hay Love) have a backyard bar-b-q and decide to come up on some bud. Not knowing where to turn, because the streets have been dry for a few months, they end up scoring from the son of a over protective mob figure by the name of Fredrico, who vows, if anything should happen to his son, their will be hell to pay. After a tragic accident, the four friends are on the run with only one person to turn to, Krego, Brisco's long time friend. Krego confirms to them, Fredrico is a very powerful man, and there is no escaping his fury. Their only option is to change their appearance through underground plastic surgery, which would take them on a five hundred mile road trip. Along the way, they will have to avoid Fredrico's beautiful assassin, Venus, and other unsavory characters, leaving them to ponder the question, was it just dumb luck, or was it the bud?

Where to watch I Accidentally Domed Your Son

The cast of I Accidentally Domed Your Son

More Action movies like I Accidentally Domed Your Son

More action tv shows like I Accidentally Domed Your Son

Watch I Accidentally Domed Your Son