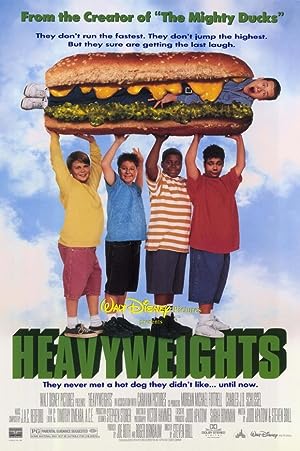 How to Watch Heavyweights 1995 Online in Australia

The cast of Heavyweights

What is Heavyweights about?

11-year-old Gerald "Gerry" Garner lives in Long Island, New York, and he's overweight. Gerry's parents Maury and Mrs. Garner decide to send Gerry to Camp Hope, a camp for overweight boys. The camp is owned by kindly Harvey Bushkin and his equally kind wife Alice Bushkin. When the Bushkins file for bankruptcy the camp has to be sold, it is bought by a wacko named Tony Perkis. Tony plans to force the campers to lose as much weight as they can, and he also intends to document the marathon shedding of weight and use it for an infomercial for his slenderizing program. In the eyes of the campers, Tony has made Camp Hope a living hell. As Gerry and counselor Pat Finley lead the efforts to overthrow Tony, the campers prepare for the Apache Relay against arch rival Camp MVP. The Apache Relay is a kind of race in which Camp Hope has never defeated Camp MVP before.

Where to watch Heavyweights