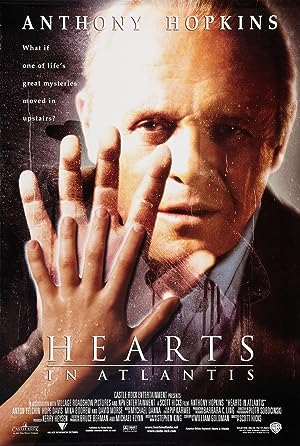 How to Watch Hearts in Atlantis 2001 Online in Australia

What is Hearts in Atlantis about?

This is a gentle, innocent film about the reflections of an aging man, who returns to his home town after the death of his best friend. Memories of life at age 11 floods back as it was a magical time that changed his life. Three 11 year old children (Bobby, Carol, and Sully) share their lives. Carol and Bobby have a special affection for one another including sharing a kiss "by which all others will be measured". Bobby lives with his mother, a bitter, vain woman who looks for pleasures for herself without sharing much with her son. Into their lives comes a mysterious new boarder, who befriends the boy but generates distrust from the mother. As time passes, the man and boy share confidences and special powers are revealed. The man warns the boy to be on the lookout for the "lowmen", who were seeking him. The two share a summer's adventures and come to love one another before the inevitable happens. A confrontation with a school bully also changes everyone.

Where to watch Hearts in Atlantis

Which streaming providers can you watch Hearts in Atlantis on

The cast of Hearts in Atlantis