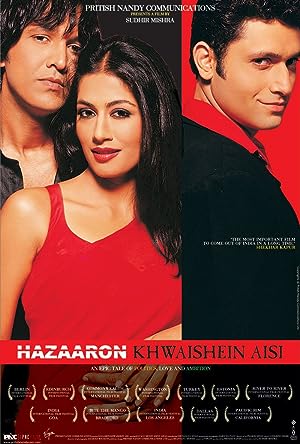 How to Watch Hazaaron Khwaishein Aisi 2003 Online in Australia

What is Hazaaron Khwaishein Aisi about?

Geeta Rao has two admirers - one is Siddharth Tyabji and the other is Vikram Malhotra circa 1969 West Bengal that is witnessing it's struggle against the ruling Congress party, joining forces with left-wing Marxist and Communist parties. While Siddharth is directly involved in this struggle, Geeta and Vikram are romantically involved. When Vikram does not make any move toward marriage, despite of being introduced to Geeta's Madras-based family, she decides to give up on him, and he starts his romance with another young woman. While students continue to voice their disapproval of Prime Minister Indira Gandhi, the Allahabad High Court gives a judgment indicting her for several offenses under the Representation of People Act. Mrs. Gandhi then uses her powers to clamp Emergency, taking away all powers of the judiciary, giving police virtually unlimited powers to the Police to detain anyone under the National Security Act, imprisoning leaders of all political parties, empowering her son, Sanjay Gandhi, to indiscriminately carry out Human Rights abuses in order to fulfill her "Family Planning" mandate, and her 20-point program. Vikram's father is one such person who is arrested and held in a cell. Siddharth also is on the run; Vikram, who was never a part of this struggle, himself becomes entangled in it.

Where to watch Hazaaron Khwaishein Aisi

Which streaming providers can you watch Hazaaron Khwaishein Aisi on

The cast of Hazaaron Khwaishein Aisi