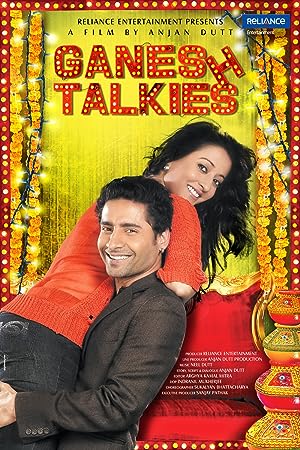 How to Watch Ganesh Talkies 2013 Online in Australia

The cast of Ganesh Talkies

What is Ganesh Talkies about?

Pashupati Ghosh (Bengali) and Pravin Agarwal (Marwari) are childhood friends living in the older part of Kolkata. Pasupati's ancestral business is in the doldrums. His only possession is his huge mansion, which the local promoter Sharma is after. Builder Sharma has employed the local hoodlum Keshto to forcibly vacate Pashupati's mansion. Pravin's ancestral business of manufacturing crackers is doing well. He also owns a cinema hall called Ganesh Talkies which is almost defunct. Pravin's NRI brother Navin, who has lost his job in the US is back and is secretly making a deal to sell Ganesh Talkies to builder Sharma and open up a restaurant. Sharma is using Navin to help him get Pashupati's mansion too. Pasupati's daughter Saban is getting married to a young NRI called Nicky from Boston. Pravin is bearing most of the cost. Parvin's carefree, unemployed son Arjun, is like Saban's brother who is taking care of all the arrangements such as catering, the construction of the shamiana, sending guest cards. Shibu, the sevant of Pasupati is secretly trying to elope with Manda, the maid of Pravin's house. Nicky arrives from the US. Nicky and Shaban, chaperoned by Arjun meet in a hotel to get to interact freely. Nicky is told that Saban is in love with Arjun. Since their fathers are like brothers and will not agree they wanted this marriage to be cancelled. And so they were waiting for Nicky to cancel it. All Nicky has to do is say he doesn't like Saban. Nicky is stunned and goes home to spill the beans... All hell breaks loose. The best of friends Pasupati and Pravin now show their true communal colors. The age old clash between the Marwari and the Bengali surfaces. All relationships are severed. Pashupati refuses Pravin's money and sells his house to Sharma to get money and is hell-bent to get Saban married to Nicky. Arjun and Saban plan to elope...So does Shibu and Manda... Ganesh Talkies is a comic drama about the love hate relationship between the two Hindu communities who finally through a lot of dramatic conflict, hilarious situations, even fights and action end up coming together. A story of true friendship and values that withstand the test of time.

Where to watch Ganesh Talkies