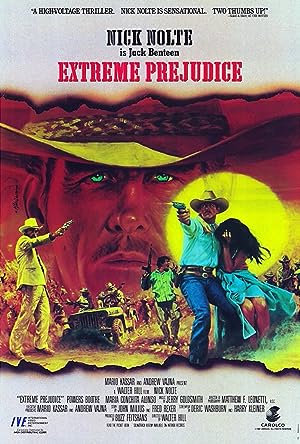 How to Watch Extreme Prejudice 1987 Online in Australia

The cast of Extreme Prejudice

What is Extreme Prejudice about?

When they were kids Texas Ranger Jack Benteen used to be best friends with drug kingpin Cash Bailey. At present, however, the only element linking them together is Jack's girlfriend Sarita, who used to be with Cash. She returns to Cash as a voluntary hostage to make certain that Jack keeps his hands off the drug lord's operation. On top of that, there is a meticulously planned drug bust, in which both Jack and Cash butt heads with CIA-funded paramilitary Maj. Paul Hackett, following his own agenda.

Where to watch Extreme Prejudice