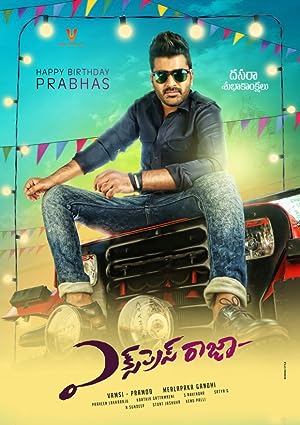 How to Watch Express Raja 2016 Online in Australia

What is Express Raja about?

The film starts with Raju's (Sharwanand) attempt to steal a puppy from a guarded woman as his uncle (Prabhas Seenu) and Sapthagiri become his team willingly and reluctantly, respectively. Moments after running away from the scene in a ramshackle van, Raju stars narrating his life days before the incident. After coming to Hyderabad with Prabhas Seenu, Raju fell in love with Amulya (Surbhi), the future fiance of Kesava Reddy (played by Harish Uttaman). His hatred towards dogs makes him impulsively hand over Amulya's puppy to dog cullers and this threatens to lead to their break-up. It is now up to Raju to trace that dog and in the process, he faces obstacles from a whole range of funny characters and Kesava Reddy, the one major character with no comic side. The director of 'Venkatadri Express' fame has done a fairly good job in telling and executing a not-so-novel idea with doses of fun. The first half establishes the incident and the second half is more about delineating the dog-stealing incident more elaborately through occasional revisiting. Besides it is also about Sapthagiri, Urvashi, Shakalaka Shankar, Supreet, Dhanraj and Supreet doing their bit to add to the comedy of errors and confusion. Raju and Amulya continue to achieve success in their mission slowly and steadily, and it all ends with the hero, hitherto regarded as an irresponsible son by his father, becoming a real-life hero. In so far as writing a screenplay that doesn't complicate matters for the audience, this film steals a march. More than the curious turns in Raju's life, the idiocy of characters keeps the entertainment quotient up. Sapthagiri makes it a laugh riot in every scene he is seen. Prabhas Seenu complements his efforts. Urvashi is one talented yesteryear actress who has the potential to re-invent herself through well-written roles like it was the case in Size Zero. In this film, she is quite watchable both as a power-hungry mother of a villainous son and someone who loses her memory and turns into Vasantha Kokila's Sridevi. As character after character turns out to have a stake in the dog, the audience looks forward to a routine denouement. The climax doesn't have the scale or imagination to be worthy of being talked about. It would have been interesting if the hero was shown to have actively worked towards preventing the dog from falling into the hands of Supreet or Harish Uttaman, revealing what he did to ensure that in the climax. By showing Dhanraj as instrumental in making Sharwa a hero, the climax was robbed of excitement, although a smile on the face is certain.

Where to watch Express Raja

Which streaming providers can you watch Express Raja on

Here is the comprehensive list of streaming providers that will show Express Raja in Australia. If Express Raja will appear with other providers further down the line, this table will be updated.

The cast of Express Raja