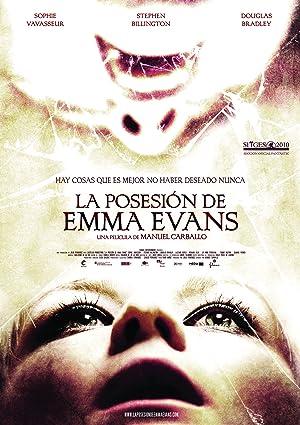 How to Watch Exorcismus 2010 Online in Australia

The cast of Exorcismus

What is Exorcismus about?

Fifteen year-old Emma Evans has an argument with her mother Lucy since she wants to go to a concert in London with her friends Rose and Alex. Emma immediately has a convulsion and her family takes her to the hospital, but the doctors do not find any physical problem. Then her father John tries to convince his wife to send Emma to school, instead of homeschooling, but she prefers to keep Emma in the family-based education. Lucy sends her daughter to the psychoanalyst believing that she has psychological problems and Emma asks her friend Rose to record her session of hypnosis though the cellular but the doctor dies during the session. When Emma listens to the tape, she believes she is possessed by the devil and asks her parents to be submitted to an exorcism with her uncle, Priest Christopher Taylor. However her skeptical mother is against the ritual and recalls that Chris was responsible for the death of a teenager, Ana, in the past in an unsuccessful exorcism. But when Emma levitates in the kitchen in front of her family, her parents call Chris.

Where to watch Exorcismus