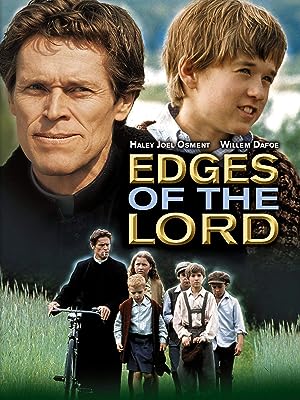 How to Watch Edges of the Lord 2001 Online in Australia

The cast of Edges of the Lord

What is Edges of the Lord about?

Polish 12 year-young city Jew Romek gets a crash-course in Catholicsim from his daddy ('stay hanging by your arms till your prayers are perfect') so he can be sent away and escape deportation (Auschwitz?) hiding in the country where the clergy found a host, Gniecio's simple peasant family, posing as their city relative. Gniecio's eldest son Vladek proves rather tyrannical but no brighter then gullible junior Tollo, who takes a role play in catechism class to 'become' a Last Supper character, in his case Jesus, to the extreme, even training for a crucifixion from a tree. Neighbor Batylin and his wife are executed by the Nazis when their illegally kept pig is found. Kluba plays a dirty trick when Gniecio tries to sell his in the city; his son is as problematic for the boys, who meanwhile play involving a single girl-playmate, Maria, who takes Romek in when he's stupidly thrown out by his widowed host by mistake. The horror of war itself suddenly shows its ugly head again, big time and in weird ways with unforeseen consequences...

Where to watch Edges of the Lord

Watch Edges of the Lord

More Crime tv shows like Edges of the Lord