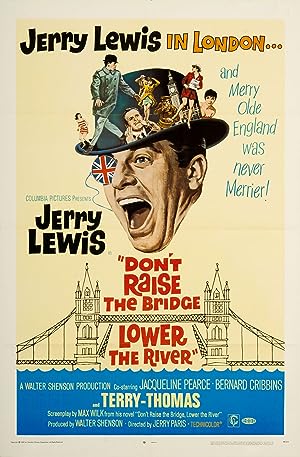 How to Watch Don't Raise the Bridge, Lower the River 1968 Online in Australia

The cast of Don't Raise the Bridge, Lower the River

What is Don't Raise the Bridge, Lower the River about?

George Lester is a man who is chasing rainbows, looking for the pot of gold at the end. When his wife, Pamela grows tired of being dragged all over the world, she leaves him. While she is away, George converts her family home into a discotheque, when she returns, she threatens to send George to jail for fraud, cause she didn't give her approval. George needing some fast bucks, decides to turn to an old cohort of his, William Homer but Willy's a little short. George then decides to steal the plans to a new drill, Pamela's suitor, Dudley Heath is working on. But when George gets the mumps, he can't make it to the meeting place and refuses to give Willy the plans unless he gives him the cash first. And the buyers won't give unless they see the merchandise first.

Where to watch Don't Raise the Bridge, Lower the River