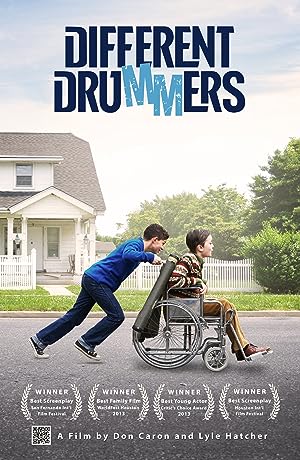 How to Watch Different Drummers 2013 Online in Australia

The cast of Different Drummers

What is Different Drummers about?

Different Drummers is based on a true story about two unusual boys in Spokane, Washington in the mid 1960s. In this more innocent time, when body builder Jack Lalanne ruled the airwaves, the two heroes, a couple of elementary school students, make a bold attempt to triumph over mortality through friendship. Eleven year old David is slowing down and is now wheelchair-bound by muscular dystrophy, while Lyle can't stop speeding up. Back then, he was referred to as having a condition called MDB (Minimal Brain Dysfunction) but today he would be diagnosed with "Attention Deficit Disorder." Lyle wants more than anything to get David out of his wheelchair and running again, and he concocts a wild scheme involving a science project, some firemen, drummers, the school principal, a cop and a hand-walk across the school gymnasium, among other things. It works like this: Inspired by his TV idol, Lalanne, and his message of "intestinal fortitude and willpower," Lyle manages to convince David that he can teach him to run and in exchange David promises to help him create the scariest science-project-bug-collection in fourth grade history. Secretly, Lyle is using his attempt to get David out of his wheelchair as a test to find out once and for all if God actually exists. Once the pact is made, this unlikely pair embarks on a journey of discovery, adventure and risk. When Lyle begins to twist the rules in a desperate attempt to give his friend some of his own excess energy, they come face to face with life's most inspiring and painful truths. Ultimately it is only through David's death that Lyle discovers the true meaning of friendship, loyalty and miracles.

Where to watch Different Drummers