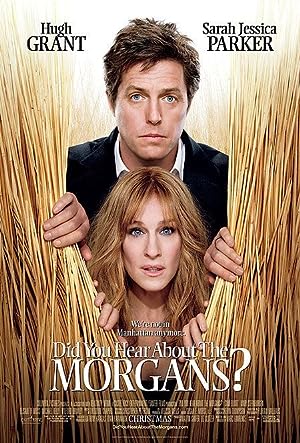 How to Watch Did You Hear About the Morgans? 2009 Online in Australia

The cast of Did You Hear About the Morgans?

What is Did You Hear About the Morgans? about?

Meryl and Paul Morgan have separated since his infidelity. He's a Manhattan lawyer, seeking forgiveness. She's moved on, focusing on real estate sales. As he walks her to an appointment one evening, pleading his case, they witness a murder; the murderer sees them. The FBI wants them in witness protection until the killer is caught. He's already hunting them. The FBI sends them to Ray, Wyoming, a tiny ranch town, where they stay with the aging sheriff and his gun-toting wife (who's his deputy). Meryl and Paul must sort out their relationship while their New York ways bump up against those of the West. Meantime, Meryl knows two things that Paul doesn't.

Where to watch Did You Hear About the Morgans?

Did You Hear About the Morgans? Trailer

Watch Did You Hear About the Morgans?

More Comedy movies like Did You Hear About the Morgans?

More Comedy tv shows like Did You Hear About the Morgans?