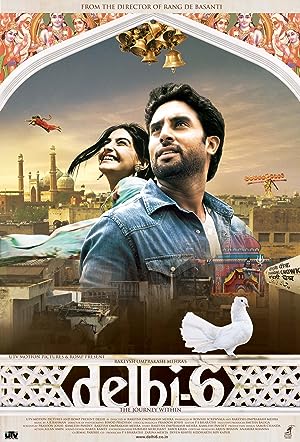 How to Watch Delhi-6 2009 Online in Australia

What is Delhi-6 about?

U.S.-based Roshan Mehra's mother, Fatima, is Muslim, while his dad is Hindu. When his ailing grandmother, Annapurna, wants to re-locate to Delhi to spend her last days, he accompanies her. Upon arrival, they are greeted by Ali Beg, who wanted to marry Fatima, but was not able to disclose his feelings to her. He also gets to meet the Sharma family, who hope that he will wed Rama, the daughter of Madan, who is busy looking for a groom for his other rather rebellious daughter, Bittu, who wants to be the next Indian Idol. He also gets to meet assorted Muslim and Hindus, who welcome him with open arms, and he gets to witness that lower caste Indians are still being shunned despite of modern technology and the launching of satellites. When reports of a Kala Bandhar terrorizing the community increases, Hindus start to suspect that it may be a Muslim terrorist, while the Muslims fear that it may be a Hindu political ploy to demolish a mosque.

Where to watch Delhi-6

Which streaming providers can you watch Delhi-6 on

Here is the comprehensive list of streaming providers that will show Delhi-6 in Australia. If Delhi-6 will appear with other providers further down the line, this table will be updated.

The cast of Delhi-6

Delhi-6 is a great Drama movie, we’ve selected several other movie options that we think you would like to stream if you have watched Delhi-6

Delhi-6 is a great drama show, we’ve selected several other show options that we think you would like to stream if you have watched Delhi-6