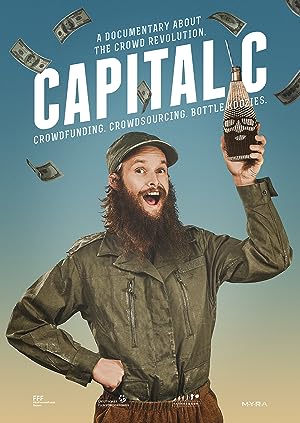 How to Watch Capital C 2014 Online in Australia

The cast of Capital C

What is Capital C about?

In just a few years, crowdfunding has empowered a whole new generation of artists to create things in a way that's never been done before. CAPITAL C is the first feature length documentary dedicated to crowdfunding, focusing on the hopes and dreams as well as the fears and pitfalls of independent creators in the wake of the digital age. Over a period of three years, the film is following the endeavors of poker card designer JACKSON ROBINSON, hippie ZACH CRAIN, and video game veteran BRIAN FARGO, all of whom reach out to the crowd in order to change their lives forever: With the unforeseen crowdfunding success of his hand-drawn poker card deck, JACKSON ROBINSON is facing the opportunity to make himself visible as an artist. Soon he has to learn that the fruition of his dream is coming at a price for him and his young family. From the get-go, ZACH CRAIN and his team rely on the crowd to create knitted bottle koozies. However, the hippie attitude of their crowdfunding campaign not only draws the attention of their ever-growing community. Competitors and business sharks are seeking their share of the pie as well. After 20 years, video game veteran BRIAN FARGO finally finds a way to reboot his classic Wasteland through a multi-million dollar crowdfunding campaign. Now the eyes of more than 60,000 supporters are on him to deliver on his promises for Wasteland II. In addition, renowned crowdfunding experts such as Scott Thomas (design director Obama campaign), Seth Godin (best selling author) or Molly Crabapple (political artist) share their insights on the topic. Production note: In 2012, CAPITAL C was funded by 586 people from 24 countries through a crowdfunding campaign on Kickstarter. CAPITAL C is an independently produced debut film that will be in cinemas April 2015 in Germany, Switzerland, Austria, and Japan.

Where to watch Capital C