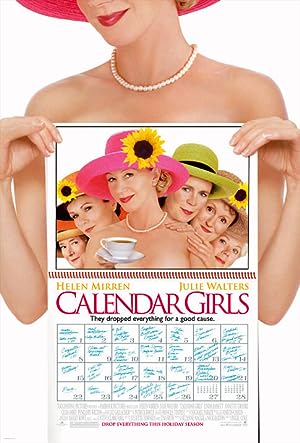 How to Watch Calendar Girls 2003 Online in Australia

The cast of Calendar Girls

What is Calendar Girls about?

Middle aged Chris Harper and Annie Clarke are best friends. They spend much of their time at their local Knapely, Yorkshire County chapter of the Women's Institute (WI), whose motto is "enlightenment, fun and friendship". Although they like most of the women at the WI (the friendship part), they, but the perceived flaky Chris in particular, hold the way Marie, the local president, runs the chapter with derision. They find much of what goes on there, especially the monthly presentations, banal and devoid of enlightenment and fun. Equally as banal was last year's fund-raising calendar, featuring local bridges, which raised a meager £75.60, with this year's proposed calendar, local churches, promising to be even more so. After Annie's husband John passes away from leukemia, Chris wants the WI to provide a memorial in his memory: a new sofa for the family room at the hospital. The one Chris wants to buy costs £999, which she proposes to raise by changing the fund-raising calendar to one featuring tasteful photographs of nude Knapely WI members. She got the idea by seeing all around her the notion of the old adage that sex sells. Annie likes the idea as it is analogous to one of horticultural-loving John's last statements about plants being the most glorious in the latter stages of their life, after which they quickly go to seed. To get the project off the ground, they not only have to convince nine other WI members to pose (December to be a group photograph), but they have to find a photographer they trust that will treat this task as an art project. Conversely, they aren't sure if they and the calendar will meet with the same contempt from Marie, the national WI organization and their friends and family that they are so trying to change in the Knapely WI, and in the process not only not raise the necessary money but in fact lose money instead. Publicity for the project in any form may have its own consequences, especially for Chris.

Where to watch Calendar Girls