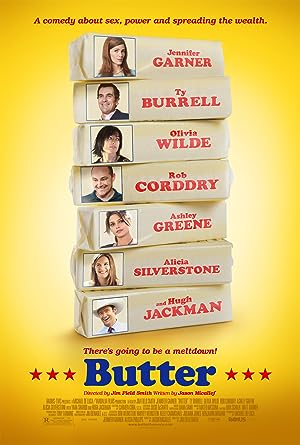 How to Watch Butter 2011 Online in Australia

The cast of Butter

What is Butter about?

In Iowa, laid-back Bob has won the state fair's butter-carving contest 15 years running; his tightly-wound and hard-charging wife Laura sees Bob becoming governor, so when the contest organizers ask him to step aside so others can win, she's incensed; when Bob won't protest, she decides to enter herself. In the county contest, she's up against Destiny, an African-American foster child, and Brooke, a prostitute Bob hasn't paid. When things don't go Laura's way, she enlists the help of Boyd, an old boyfriend. Laura's step-daughter and Destiny's foster parents are in the mix as things heat up at the state fair. What are Destiny and Laura's destiny?

Where to watch Butter