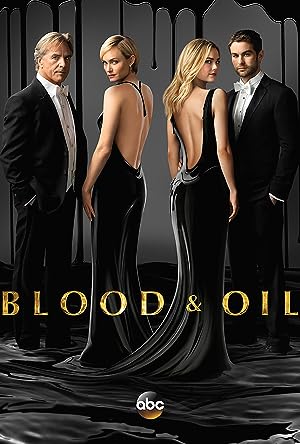 How to Watch Blood & Oil Online in Australia

What is Blood & Oil about?

The present day oil boom in North Dakota is tempting the young and ambitious to try their luck in the black gold business. Such are Billy and Cody LeFever, a young married couple that's just arrive in a North Dakotan town famous for its rich oil fields. They don't know anyone there, but Billy is ambitious and always has an idea on how to start some small business, while modest Cody makes friends easily and just wants to make a home for themselves there, even if they have to compromise and do something much more common and less glamorous and profitable than partaking in the oil business. While Cody goes to find them a place to live and a job for herself, Billy spends all the money they have, most of which came from their friends back home who pitched in to help them build a tiny starting capital, to buy a modestly lucrative plot of land owned by old and bitter Clifton Lundegren. The deal is made after some tough negotiating, but then notorious local oil baron Hap Briggs offers Billy a small piece of his action for the land. Naive Billy goes for it and learns first hand why most people, and especially Clifton, hate the old savvy swindler Hap. Although desperate, Billy decides to do his best to somehow get into the business despite Briggs' paw over the local oil market. Meanwhile, Hap has to deal with his troubled family. His new wife Darla is an elegant but melancholic trophy wife, who knows her place. His son Wick is a loser, who in frustration makes a faithful decision to rob one of his dad's oil rigs one night with his shady friend Garry and makes the biggest mistake of his life. Hap's favorite child is his daughter and competent businesswoman Lacey, who naively sees her half-brother Wick as a victim of circumstance burdened by the weight of his father's shadow and always stands up for him. However, old Hep is also a troublemaker and is secretly having an affair with his son's English-born sly girlfriend, who runs a popular local bar and can't decide between the two Briggs. Wick's biggest problem is the experienced local Sheriff Tip Harrison, who knows all the skeletons in the townspeople's closets, and suspects Wick and Garry of wrongdoing but can't prove anything yet. Hap's biggest problem is his ruthless out of town competition that will stop at nothing, including blackmail, spying and theft, to find out what's his secret next big business move that's suppose to make him a big name even outside of North Dakota.

Where to watch Blood & Oil

Which streaming providers can you watch Blood & Oil on

Here is the comprehensive list of streaming providers that will show Blood & Oil in Australia. If Blood & Oil will appear with other providers further down the line, this table will be updated.

The cast of Blood & Oil

Blood & Oil is a great Crime movie, we’ve selected several other movie options that we think you would like to stream if you have watched Blood & Oil

Blood & Oil is a great crime show, we’ve selected several other show options that we think you would like to stream if you have watched Blood & Oil