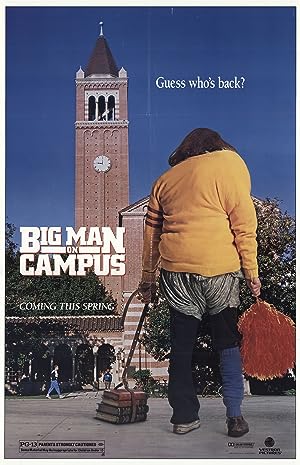 How to Watch Big Man on Campus 1989 Online in Australia

The cast of Big Man on Campus

What is Big Man on Campus about?

A suspicious hunchback is spying through a scope on the UCLA campus from a tower which he makes his home out of, when his eye catches a beautiful girl. He lustfully keeps his eye on her until he sees her being violently pushed away while trying to stop a guy from beating up her boyfriend. This makes the hunchback mad and he makes himself known by swinging from a rope Tarzan style onto the campus and attacks the man who pushed the girl away. The hunchback is later taken into custody by campus officials and is later examined by the campus professors, Cathy, the beautiful girl, and Alex, her boyfriend. While on a ride back to the campus, the hunchback escapes the police car and is being chased by Alex, Cathy, and one of the professors riding along with them, Dr. Webster. He leads the trio to his tower and shows them the whole place. Dr. Webster then feels that it's best for him to stay there and he, along with Cathy, asks Alex to stay with the hunchback. After a long argument, Alex finally agrees and makes his home with the hunchback. The hunchback learns about life on Earth through Dr. Webster and another professor, Dr. Gerard. Alex and the hunchback, who later calls himself Bob Malooga-Looga-Looga-Looga-Looga, have their arguments and turmoils, especially over Cathy, but they later resolve their friendship when Bob gets a call about Cathy being in trouble and he goes to help Cathy, only to find it a hoax and he runs from the campus officials, who are trying to arrest him for breaking into the girl's dorm.

Where to watch Big Man on Campus