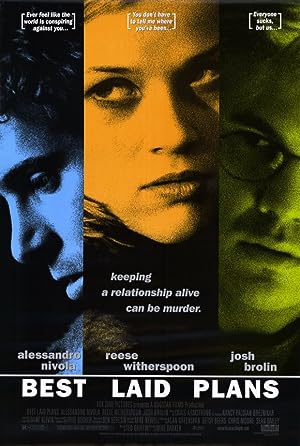 How to Watch Best Laid Plans 1999 Online in Australia

What is Best Laid Plans about?

Bryce (Josh Brolin) is a successful man who returns to his tiny hometown for a visit. While there, he runs into his old friend Nick (Alessandro Nivola). The two decide to go out for the night. When they enter a bar, Bryce encounters Kathy (Reese Witherspoon), a blonde temptress whom he eventually takes home for the night. When he awakens, Kathy informs him that she is underage and threatens to tell the police that Bryce has committed statutory rape. Bryce panics and decides to tie her up and hide her away in the basement. He then makes a call to Nick. Unbeknownst to Bryce, Kathy is actually Nick's girlfriend Lissa. The two had schemed to use Bryce's money to pay off a $15,000 debt they owe small-time hood Jimmy (Terrence Howard).

Where to watch Best Laid Plans

Which streaming providers can you watch Best Laid Plans on

The cast of Best Laid Plans

Best Laid Plans is a great Crime movie, we’ve selected several other movie options that we think you would like to stream if you have watched Best Laid Plans

Best Laid Plans is a great crime show, we’ve selected several other show options that we think you would like to stream if you have watched Best Laid Plans